A legend in compact, high-end devices 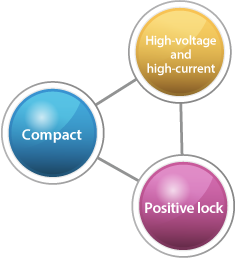 EnerBee -Your best choice for power cable connectors.
Named after the tiny, yet energetic insect, the EnerBee name represents the shared concept of this product family - compact size with high-end performance. In addition to its superior performance, small size and the ability to support high-current and high-voltage devices, EnerBee oﬀers a positive lock mechanism to meet various requirement of industrial power supply and power sources.
Replacing bulky parts in the market with EnerBee connectors allows you to maximize space-saving and achieve superior performance. Additionally, by replacing locks with the EnerBee's built-in positive lock mechanism, assembly quality and work eﬃciency are improved.
If you have design problems, the EnerBee is your solution!

Three keying and color options are available for the DF22 series. This prevents incorrect mating of the connectors when using multiple DF22's with the same pin count on the same design. (All product series)
Ex. 2pos., right-angle pin header

Three contact points in the lower portion have an independent spring action and allow for each contact point to position itself when mating. (DF60/DF63/DF22 series)

In a sequential structure, terminal No.4 is designed to act as a ground terminal and makes contact before the other three terminals when mating. (EM35M series) 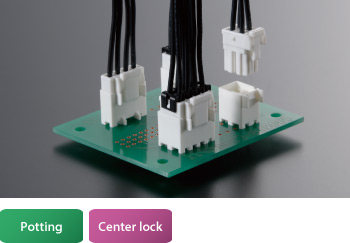 Despite being the smallest sized EnerBee connector, the DF33C connectors meet the 1.5mm* creepage distance as stipulated by the Electrical Appliance and Material Safety Act. Suitable for potting (resin sealing) up to 6.5mm in height. Widely used as a compact connector for internal power supplies.
*After potting 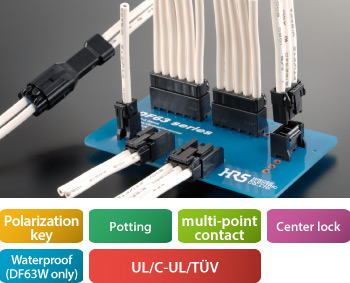 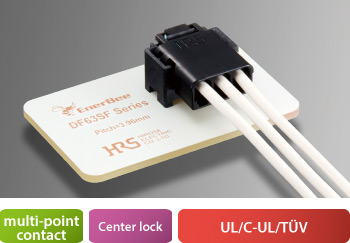 In addition to the EnerBee's core design concepts o "compact and high current", the DF63SF creates space-saving due to the vertical mating with latera cable design. Also, it is possible to attach parts under the cable, which enables design ﬂexibility. Additionally, It supports through-hole reﬂow (THR) mounting to improve work eﬃciency. 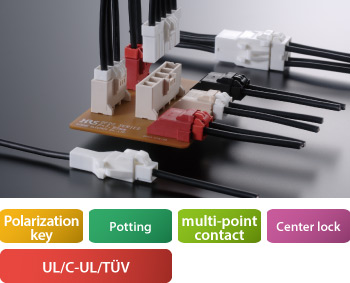 The DF22 series is compact on size, but big on current capacity. The most popular EnerBee connector with a long sales history and wide customer appeal. Variations such as keying, pin count and latch styles, are available to allow the connector to be matched to the application at hand. 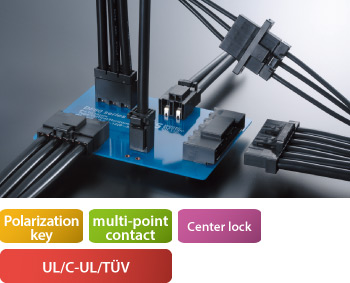 With its high power and large current capability, the DF60 Series is the most compact connector we oﬀer for this level of current. It features a multi-point contact structure with a center lock mechanism and oﬀers increased operability with high reliability when connecting to main power sources. A ﬁnger protection type is also available. 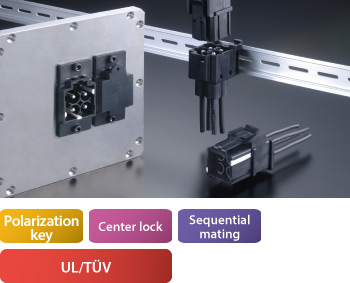 A relay type connector with the largest current capacity in the EnerBee family, the EM35M series is commonly used for wiring on larger devices. The EM35M series are good choices when replacing terminal blocks, since they can eliminate screw tightening process and drastically improve assembly eﬃciency. Applicable for use in both DIN rail and panel mounting.

* In cases where the application will demand a high level of reliability, such as automotive,please contact a company representative for further information.